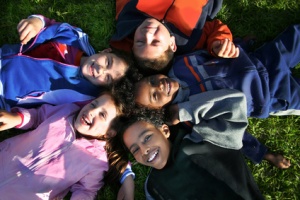 From hide-and-seek to tearing around the neighborhood with friends, playing is one of the hallmarks of childhood. But in this era of hyper-vigilant parenting, researchers find that children in the United States have far less time to play than kids of 50 years ago, a trend that may have serious consequences for their development and mental health.

“Into the 1950s, children were free to play a good part of their childhood. If you stayed in your house around your mom, she’d say ‘go out and play.’ The natural place for a kid was outside,” said Peter Gray, a research professor of psychology at Boston College.

“Today, it’s quite the opposite. Parents are not allowing kids the freedom to play. And even if they do, there are no other kids out there to play with, or the mother may have such restrictions on the child, such as ‘you can’t go out of the yard’ that the kids don’t want to stay out there,” added Gray.

When kids are allowed to play, they make up games, negotiate rules and make sure others are playing fair. All of that helps to teach children how to make decisions, to solve problems and gain self-control. Children who have too many emotional outbursts or who insist on getting their way too often quickly learn they need to change their behavior if they want to continue to be welcomed into the group, Gray said.

Through free play, “they are acquiring the basic competencies we ultimately need to become adults,” said Gray, author of two studies published recently in the American Journal of Play. But since the mid-1950s, adults have played an increasingly larger role in their children’s activities, to the detriment of their kids’ mental health, Gray said. And, playing organized sports with a coach or other adult directing the activity doesn’t replace “free” play that’s directed by kids, he noted.

Research suggests that today’s children are more likely to experience anxiety, depression, feelings of helplessness and narcissism, all of which coincides with a decrease in play and more monitoring and managing of children’s activities by parents, he wrote in this special journal issue devoted to the decline in free play.
For boys, in particular, rough-and-tumble play helps teach emotional regulation, said Peter LaFreniere, a professor of developmental psychology at the University of Maine, in a separate article. Boys learn that if they want to keep their friend, they can’t let things go too far or truly hurt the other child — a skill that helps boys grow into men who keep aggression and anger in check, LaFreniere said.

“It’s better to make the mistakes when you’re 4,” he said. “Children learn there are consequences to their actions; they learn to regulate the aggression even in the heat of the moment.”

Despite a growing chorus from experts about the importance of play for kids’ mental and physical well-being, research indicates the amount of time kids are playing has declined significantly. One survey Gray cited asked a nationally representative sample of parents to keep track of their kids’ activities on a randomly selected day in 1981 and another in 1997. The researchers found that 6- to 8-year olds of 1997 played about 25 percent less than that age group in 1981.

Another study from about a decade ago asked 830 U.S. mothers to compare their children’s play with their own play when they were kids. While about 70 percent of the mothers reported playing outdoors daily as children, just 31 percent said their own kids did. Mothers also said when their kids played outside, they stayed outside for less time. If anything, that trend has accelerated in the ensuing decade, Gray said.

So what’s keeping kids indoors? Fear of abduction is a big one, followed by worries about kids getting hit by cars and bullies, surveys have found. Those fears have created legions of overprotective parents rearing “wimps” who are unable to cope with the ups and downs of life because they have no experience doing so, said Hara Estroff Marano, the New York-based author of the book A Nation of Wimps: The High Cost of Invasive Parenting.
“The home of the brave has given way to the home of the fearful, the entitled, the risk averse, and the narcissistic,” Marano said. “Today’s young, at least in the middle class and upper class, are psychologically fragile,” Marano said in an interview published in the journal.

Hovering parents, these researchers said, also deprive their children of something else — joy. One survey found that 89 percent of children preferred outdoor play with friends to watching TV.

“Parents have to remember that childhood is this special time. You only get it once, and you don’t want to miss it,” LaFreniere said. “Mixing it up with other kids in an unrestrained manner isn’t just fun. It isn’t a luxury. It’s part of nature’s plan.”

TOGETHER AT LAST FAMILY SUPPORT

Unauthorized use and/or duplicatiion of the material on this blog site without the express written permission of this blog's author and/or owner is strickly prohibited. Excerpts and links may be used, provided that full and clear credit is given to Deborah Beasley, ACPI CCPF, and How Does Your Child Grow.wordpress.com with appropriate and specific direction to the original content.
%d bloggers like this: